After a late start, my brother David and I left Thomaston, Connecticut at 8:30 AM on Sunday morning. Once through Litchfield, it was apparent that winter had arrived in the Northwest hills of Connecticut. We arrived at the trailhead (~700 feet) on Route 41 in Massachusetts a little before 10:00 AM.

The Race Brook Trail starts out with only a slight elevation gain, but gradually increases for the first half a mile. After crossing the river the trail become moderately steep. At about the 1.0 mile mark, the trail bears left with a loop to the right towards the lower part of Race Brook Falls. We continued up the ravine towards the upper falls. We took a short break at about 1.2 miles and 1200 feet and enjoyed the sweet smell of pine and freshly fallen leaves. We soon arrived and the upper portion of Race Brook Falls. 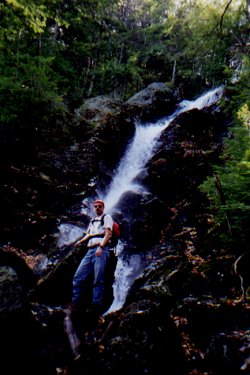 This 80 foot waterfall cannot be described as anything short of beautiful. It ranks up there with many of the waterfalls in the White Mountains of New Hampshire, if not more impressive. After a short break at the waterfall and a chat with a very enthusiastic fellow in his fifties, we continue up the trail towards the Appalachian Trail junction.
The next half a mile while not overly steep seemed to be the most challenging part of this hike. It seems the 48 ounces of coffee that David drank that morning and the nachos and chicken wings that I had the night before finally caught up with us. No mistake about it, this is a challenging day hike. We both took another short break of candy bars and then on to the summit of Mount Race. 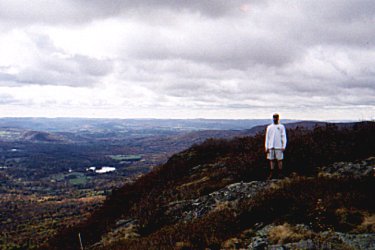 The trail climbs steadily to the ridgeline from the top of the falls. We spoke briefly to the gentleman we saw earlier who scrambled directly up an old trail that once followed the falls. After investigating the tent platforms on the left side of the trail we continued up the trail past an excellent outlook to the northeast. At about the 2.2 mile mark, we reached the AT junction. We headed left on the AT towards Mount Race. 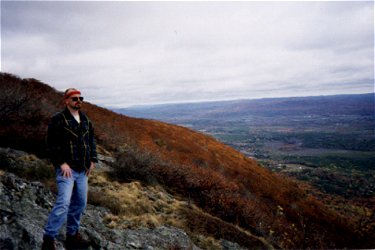 Both David and I finally felt better physically and quickly summited Mount Race (2365 ft). It was still considerably cloudy, in the upper thirties with a moderate breeze. We headed down the south side of the summit to a barren ridge overlooking Twin Lakes and Rt. 41.

After a brief lunch and chat with a woman from Pittsfield on David’s ham radio, we headed back down the AT to the Race Brook Trail. We came across the same eccentric hiker from earlier that day who told us of his adventure up the fire tower on Mount Everett. We continued down rather quickly past many late leaf peepers.
Although very crowded, this was an excellent hike. Each section of the Race Brook Trail is unique and truly impressive. Many areas of this ravine make you feel as though you are much further north in New England. This is a highly recommended, moderately difficult hike that can be accomplished in half a day. The trailhead is a few miles north of the Connecticut/Massachusetts border. There is a parking area on the left hand side of Route 41 North.