The Line Sir Francis Bacon ski is simply one of the most fun and playful skis I have ever had the opportunity to ski on.

Before I go too much into this review, let me set the stage with some background on myself and what I have been skiing for the past few years. I have been skiing on Atomic skis for the better part of ten years, in a single-quiver setup. As a result, I always looked for skis that were all-mountain capable. A decade ago, I skied primarily on Atomic Beta Ride 9.22. At the time, these skis were considered top of the line “all mountain” skis – 180cm in length, with 108-72-100 mm measurements, they were a big step up from the straight skis I had skied earlier. Of course, as time progressed, skis have gotten fatter and fatter, with mroe emphasis on carving vs. skidding.

In 2011, I finally got around to upgrade my skis, to an Atomic Crimson Ti. The Crimson Ti was, for all intents and purposes, an evolution of my older Beta Ride 9.22’s. Fatter all around, more carving oriented, but still billed as an all-mountain ski with outstanding edge hold – a good east coast ski for those sketchy or icy days. The Crimson Ti’s were 178cm in length, with measurements of 131-88-117. Skiing on these was a major step up from my older Beta Ride 9.22’s, but I couldn’t help feel that something was missing.

I will ski essentially any east-coast marked terrain, but my preferred skiing is in the woods and glades. I also like the bumps. At the way bottom of the list, is strictly carving groomers. I like having a more “playful” ski, especially when on snow is in the forecast or there is any measureable powder. While the Atomics Crimson Ti’s are billed as an all-mountain ski, I consider them to be at home at higher speeds on groomers, even icy; sketchy groomers. During this past Christmas, when we had the snowstorm in the Northeast, a day at Magic Mountain in Londonerry, Vermont found me wishing for a fatter and more rockered ski.

Sun and Ski in Woburn, Massachusetts reached out to me in January to ask if I was interested in demoing some Line skis. Having read many good things on the forum about Line skis, particularly the Prophet lineup, I was certainly interested. I went in to the store two weeks before our annual AlpineZone summit at Sugarloaf in Maine and met with store manage Dick Stillson, who set me up with the Line Sir Francis Bacon skis. Dick and the staff at Sun and Ski did a great job getting me setup; it was my first time in Sun and Ski and I was truly impressed with the store. I also was fitted for some Full Tilt Classic boots with Intuition liners. Dick had bindings mounted and boots tested and stepped me through some of the ski features so I left feeling comfortable to hop onto these new sticks.

The Sir Francis Bacon skis are some of the fatter skis that Line makes – not quite as fat as their full powder oriented Mr Pollard’s Opus, but still a wide 108 underfoot. The Bacons are branded by Line as their premiere freeride all-mountain ski – a twin-tip rockered design – the 178cm length I picked up had measurements of 140-108-136 – significantly fatter than my Crimson Ti’s. Immediately upon picking up the skis, however, I noticed how much lighter they were than the Crimson Ti’s I had been on before. Additionally, the bindings are center-mounted on the Bacons, giving them equal playfulness both forward and switch.

On The Snow Impressions

Enough history, everyone wants to know … how did they ski? Well, as luck would have it, Nemo was hitting the east coast the Friday before the Summit at Sugarloaf, so I was able to test the skis in their ideal environment – powder!

I arrived at Sugarloaf on Friday morning just as the snow was starting to fall and got geared up. I threw on the Full Tilt boots. I had previously been skiing on Dalbello Krypton Cross Ti’s – both boots are in actuality very similar. They share a heat-molded intuition liner – which can either be heated at the shop or simply “worn in” over the course of several hours – as well as the “classic” wraparound design that eliminates pinching and reduces the boot to just three wire buckles. The boots were very comfortable for my pronated feet – even without heat molding by the shop (didn’t have time to get it done) or custom footbeds. I did immediately notice that the Full Tilt classic boots had significantly softer flex than my Dalbellos, however this is by design – they are freeride boots.

Our first runs at Sugarloaf were pure joy. I immediately could feel the lightness and “fun” of the ski. The rockered design just busted through everything on the slopes. It had been icy in the Northeast the week before, so much of the terrain was “dust on crust” – but the skis surprisingly floated on the powder for most of the day, only occasionally passing through to the ice beneath, and even then I was surprised at how good of an edge the skis held. I expected them to perform poorly on ice / hardpack, and it was not the case. That first day, I actually thought they compared very favorably to my Crimson Ti’s.

The snow continued to accumulate overnight, and Saturday we were teed up for tracks on the mountain with a full 1′ of fresh powder. Brackett Basin at Sugarloaf opened around 1PM and I was the first through the gates, getting first tracks throughout the glades on the Bacons. And they did not dissapoint. Where I had been at Magic earlier in the year on a powder day with my Atomics, the Bacons were at home here – just floating through the snow light as can be. Quick turns in the tighter glades and, a few small 3 – 4′ hucks all felt fantastic and natural.

By Saturday evening, the snowfall stopped, and the groomers got to work on the mountain overnight. Sunday morning Sugarloaf provided first tracks passes, so I had the ability to get first tracks with the Bacons on Sunday morning on fresh corduroy. And this is where I finally noticed the only place where the Bacons fell short of the Atomics. At high speed on the groomers, the Bacons did start to get chatty due to the rockered design. They were certainly controllable, but they were not as stable as the Atomics at higher speeds (read: > 35MPH).

The best way I can describe this ski is as I stated right out of the gate. It is a fun ski, designed for having fun. It doesn’t take itself seriously, but that doesn’t mean it can’t handle any condition you throw at it. While the Atomics had stronger groomer performance, to me, the Bacons are much more of a competent “all mountain ski” – they excel in the woods and crud, and really amaze in powder. But they also had stronger than expected edge grip on ice, and were able to carve a very nice turn as well that really hooked up.

Overall, I give the Line Sir Francis Bacon skis an easy 5/5 stars. For the east coast skier that likes getting to the perimeters of the trail, enjoys the woods, this ski is just a hell of a lot of fun. If you are strictly interested in groomers and carving, then there are probably better options for you; but you wouldn’t be looking at this review anyway! 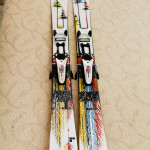 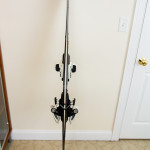 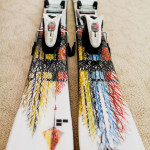 Tail of the Bacon 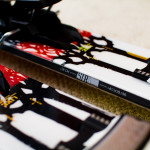 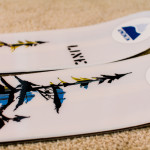 Tip of the Bacon 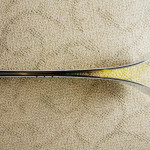 Side profile of the tip rocker 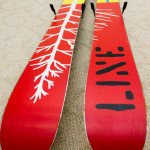 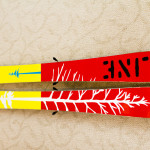 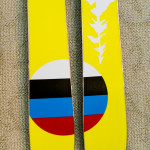