NEW HARTFORD, Connecticut — Connecticut’s Ski Sundown will be hosting the second annual “BUMP or BUST Mogul Competition” this Saturday, January 24 at the New Hartford ski area. This amateur mogul competition is open to all skiers and snowboarders with the top 16 competitors in each category competing on a dual format mogul course. Holden Johnson from WCCC, a Hartford radio station, will be at Ski Sundown during this year’s event.

Members of the AlpineZone.com forum community first expressed their interest in a mogul competition to ski area management last season. Sundown’s Mountain Operations Manager, Chris Sullivan ran with the idea holding the first “BUMP or BUST Mogul Competition” last March which proved to be one of the ski area’s most successful events last season. 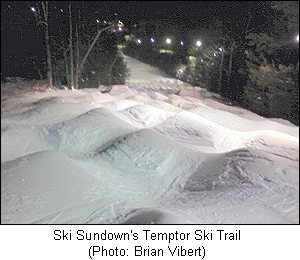 For the past several years, Ski Sundown has shown a growing commitment to offering bumps for more advanced skiers and snowboarders by consistently seeding moguls on select trails as soon as conditions allow. This season, the moguls on Nor’easter and Temptor were available on opening day and throughout the season so far. The ski area has since seeded lower angle bumps on one side of the intermediate Exhibition trail, providing an area for less advanced skiers to learn how to ski bumps. Sundown plans to offer moguls on their signature Gunbarrel trail in the spring and will be holding a second mogul competition on Sunday, March 23.

The AlpineZone.com forum community organizes casual meet-ups at Sundown throughout the season, and most times the group skis the moguls exclusively. Several AlpineZone.com members are also looking forward to participating in the event.

“I really appreciate Sundown giving us the challenge of a mogul run all year long. The mogul competitions are just icing on the cake and a real treat for our group of bump fanatics,” said AlpineZone.com member Pat Ford of Wethersfield. “Not having to devote an entire day driving around New England yet still skiing challenging trails is an opportunity I really appreciate. Hats off to Chris Sullivan and his tireless crew of employees,” added Ford.

Again this year being touted as “the competition where the strongest quads finish first,” the event will be held on Temptor where moguls have been formed on the steepest section of the trail. Two jumps have also be built on the course. Participants will be evaluated on turn/line, air, and speed.

Registration is from 12 – 1:30 pm on Saturday, January 24 with qualifying rounds beginning at 2 pm. The top 16 competitors will then be paired to compete on a dual mogul course with a sudden death single elimination format. The categories will include:

There will be a $5 entry fee and a release form is required which must be signed by a parent or legal guardian if the participant is under 18 years of age. Helmets are required to compete. Prizes will be presented to the 1st, 2nd, 3rd and 4th place finishers in each category.

Contact Chris Sullivan at [email]chris@skisundown.com[/email] or visit www.skisundown.com for additional information. The AlpineZone.com forum community can be found at forums.alpinezone.com.