While most ski resorts in the East are closed, Killington Resort re-opens the K-1 Express Gondola and 35 trails

KILLINGTON, Vt. (April 10, 2012) – Vermont’s Killington Resort, the largest ski and snowboard resort in Eastern North America, receives 19 inches of snow from spring snow storm and it’s still snowing. While other resorts in the East are closed or preparing to close, Killington is expanding terrain. The natural snowfall has allowed Ski Patrol to re-open 35 additional trails today on Killington and Snowdon Peak. 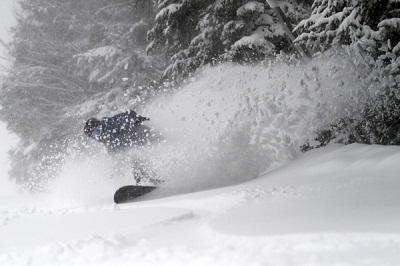 “We’re thrilled with a late season snow storm, it’s actually the biggest snowfall of the year – go figure, it’s been a crazy season,” stated Chris Nyberg, president and general manager for Killington Resort. “The new snow has allowed us to re-open the K-1 Express Gondola and several trails on natural snow,” continued Nyberg. “We’re committed to providing a long skiing and riding season for our season pass holders and guests and we plan to operate daily well into April.”

Killington Resort was the first resort to open daily for skiing and riding in the East on October 29, only eight weeks after tropical storm Irene. So far, Killington has offered 165 on-snow days, the most in the East, and plans to be open daily through April, conditions permitting.

Lodging is still available for this weekend online at www.Killington.com, or through Killington Central Reservations at 800-621-6867.

While skiers and riders are rejoicing with the outstanding powder conditions, road crews from the Vermont Department of Transportation are out in full force plowing, sanding and salting area roads.

About Killington Resort
Killington Resort is a four season destination that sits on 3,000 acres in the heart of the Green Mountains in Central Vermont. The Resort boasts more than 70 miles of diverse snow sports terrain spread out over six peaks and offers the most expansive lift network and snowmaking system in the East. After the snow melts, Killington features an 18-hole championship golf course as well as 45 miles of hiking and mountain biking trails. In addition, the numerous apres, dining, shopping and lodging options have made Killington a world-class destination for East Coast skiers and riders for over 50 years. Killington.com