BARTLETT, New Hampshire ??вЂќ After more than a month of non-stop events, competitions, ticket deals and entertainment, Attitash is set to unleash the grand finale of the 40 Days and 40 Nights celebration. For one weekend only, the high-flying stunts and fireworks of the All Star Aerial show will be on display as the resort wraps up its 40th anniversary party on March 5-6.

“I think it’s safe to say this is the largest event of the winter in the Valley,” said Tom Chasse, Attitash’s managing director. “Thousands of people fill the base area to watch the jaw-dropping action. With music and fireworks it’s quite a show.”

The All-Star athletes are a mix of Olympic, World Cup and National Team skiers and riders. 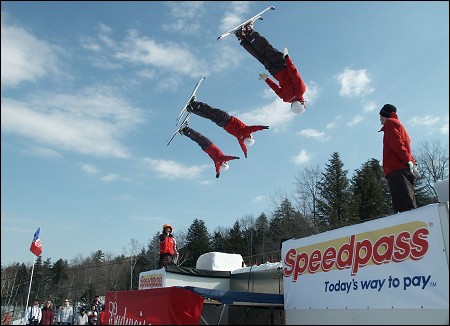 There are a total of three shows. The on-snow fun gets underway at noon and 6:30 p.m. on Saturday and noon on Sunday. The Saturday night show is the marquis event with fireworks and live music. Last season’s Saturday night All Star Aerial Show drew over 4,500 spectators.

The band “Fast Times” will be on stage in Ptarmigan’s Pub before and after the evening show. The group is an 80’s cover band that can play it all from Adam Ant to ZZ Top. The Saturday night show will also feature an Attitash Hall of Fame induction ceremony, at which Attitash’s founding fathers will be recognized.

“I particularly like my new job as t-shirt slingshot operator,” said John Urdi, vice president of brand management. “There’s a little bit of everything at the Saturday night show and this year we even plan on having a huge 40th birthday cake to share with the crowd to celebrate our anniversary.”

Attitash’s event line up continues beyond the final weekend of the 40th anniversary with Budweiser Spring Mania, the Grandstand Mogul Jam and the 12th Annual On-Snow Golf Tournament, plus the wild antics of the Red Parka Regatta.

The schedule of events is subject to change and guests are urged to visit www.attitash.com for the most current information.