West Dover, VT (August 1, 2011) – Mount Snow has announced Bluebird Express will be the name of America’s only high speed detachable six passenger bubble chair lift which is currently being installed at the Southern Vermont resort. Fittingly, the first people to learn the new name were spectators at Saturday’s Mount Snow Valley Blueberry Festival Parade in which Mount Snow entered a float complete with a bubble chair and banners brandishing the name.

“We enjoy such great support from our local community, we wanted them to have the privilege of learning the name of our new lift before anyone else”, said Mount Snow’s General Manager, Kelly Pawlak.

The name was derived from a combination of the sky blue color of the bubbles on the new chairs and the beautiful, cloudless days during the winter that skiers and riders refer to as “bluebird”.

Marketing and Events Director Vinnie Lewis says, “The Bluebird Express is going to provide our guests protection from the elements similar to a gondola cabin, but with the convenience and comfort of being able to keep their skis and boards on their feet.”

The Bluebird Express is a high-speed detachable six passenger bubble chair, manufactured by Leitner-Poma, and will be the only one of its kind in America. It will follow the same path up the mountain as the former Summit Local, a fixed grip triple chair lift, but will cut the ride time in half to just seven minutes while increasing Mount Snow’s uphill capacity by up to 800 people per hour.

For details and updates on the Bluebird Express installation visit www.mountsnow.com 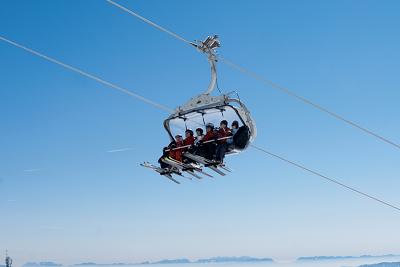