WEST DOVER, Vermont — With temperatures dipping into the lower 20s, snowmakers reported for duty at Mount Snow Saturday night, firing up the fan gun snowmaking machines on Launch Pad, a learning hill near the base area. By daybreak on Sunday, about three inches of snow had piled up and the terrain park crew moved in, setting up a small park with half a dozen features. The park opened to the public at 10 a.m. EST. 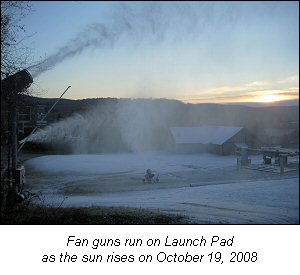 With temperatures in the 20s again last night the fan guns continued to run. The Launch Pad terrain park will be open to the public today as long as the snow holds. Visitors can secure a free lift ticket from employees stationed at the park. Visit the snow report at mountsnow.com for details and updated information.

Mount Snow was the first ski resort in Vermont to open in 2007, and was the first resort in New England to open with summit-to-base skiing. The mountain spent $8 million upgrading its snowmaking system this summer, giving it the most new-technology fan guns of any resort in North America.