WEST DOVER, Vermont — It’s been nearly ten years since Mount Snow has been able to say the following words so early in November: “We are open for skiing and riding.”

Cold temperatures and a $3.5 million upgrade in snowmaking technology have combined to give the resort its earliest opening since November 7, 1998. No other ski resort in Vermont is scheduled to open until the following week.

“Call it a renaissance,” says Mount Snow General Manager Kelly Pawlak. “Guests who have been watching us make snow all week are calling and emailing with their praise, and we are so excited to tell them that it’s finally show time.”

Terrain park features for freestyle skiers and snowboarders will be set up on the side of the lower Long John trail, which is accessible from the Nitro Express chairlift in the Carinthia base area. Lower Long John will connect with the Fairway trail, with a shuttle connecting to the Main Base Area.

Resort officials emphasize that mid- and upper mountain terrain will be open to intermediate and advanced level skiers only. Beginners may use the Launch Pad learning area, which will be serviced by the Discovery Shuttle chairlift.

Mount Snow was purchased by Peak Resorts in April. The new owners have invested more than $6 million into the resort during the offseason, including the purchase of 101 energy-efficient fan guns from SMI Snowmakers.

Lodging Packages and more information is available by calling 800-245-SNOW or visiting www.mountsnow.com. 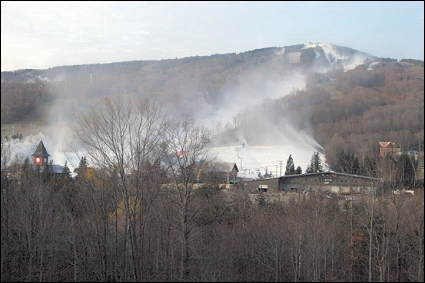