BRETTON WOODS, NH ??вЂќ The Mount Washington Cog Railway will begin preliminary winter operations Saturday, December 18, 2004. Beginner terrain will open tomorrow, with trains taking skiers, snowboarders, and sightseers partway up the tracks, making a 400- to 500-foot ski run available. Tickets for all-day skiing at the Cog will be available at a discounted price of $25 until more terrain opens. Full trail opening is anticipated for Sunday, December 26. Equipment rental for use at the Cog Railway will be available at the Bretton Woods Mountain Resort Base Lodge.

Skiers, snowboarders, and non-skiing railfans of all ages will be delighted with the prospect of riding the 135-year old steam-powered railway during the snowy months of winter. In addition to the spectacular scenery of a mountainous winter wonderland that the ride will afford, snowsports enthusiasts will have an opportunity to carve their way down the western slope of Mount Washington to the Marshfield Station by way of a groomed swath of snow running parallel to the trestle. 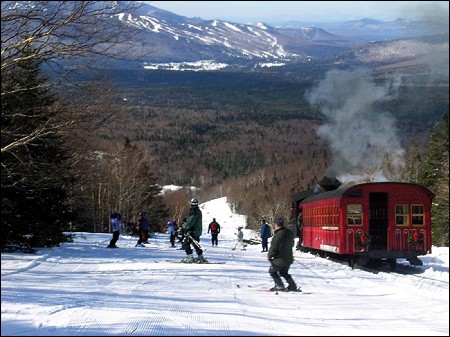 “This is probably the most unique skiing and riding experience in the world,” says Cog Railway President Wayne Presby. “Our partnership with Bretton Woods adds a whole new dimension to the alpine experience at The Mount Washington Resort.”

Starting this winter, skiing and snowboarding train passengers will have the option of riding the world’s first mountain climbing cog railway to the base of Cold Spring Hill, to access beginner terrain, or to the Waumbek Siding, for intermediate-level skiing and riding. A single groomed trail, with snowmaking, running parallel to the railway trestle is about one mile long and offers 1,100 vertical feet of skiing fun. The trail is located on land owned by The Mount Washington Railway Company and National Forest boundaries will be clearly marked as out of bounds.

“I’ve been thinking about skiing from the Cog since we purchased the railway in 1983,” said Presby. “We’ve had to overcome some technological challenges to make this a viable endeavor, but like those who came before us, we’ve met the challenges and are reaching our goals.”

The dream began in 1852 after an arduous hike to the summit of Mount Washington. Sylvester Marsh, a native of Campton, NH, envisioned a way to open the northeast’s highest summit to the masses. After reluctantly being granted a charter by the NH Legislature in 1858, Marsh began construction on a mountain climbing railway. On July 3, 1869, Old Peppersass, the little workhorse-of-an-engine that resembled a pepper sauce bottle, became the first cog-driven engine to climb the three-mile track to the 6,288-foot summit of Mount Washington. Specially designed engines with slanted boilers, to compensate for the angle of the track, were built and open-air passenger coaches ensued.

Today, in the true spirit of the original “Little Engine that Could,” the Cog Railway continues to carry passengers on the round trip journey in coaches that are pushed up the mountain by coal-fired steam engines. Excursions to the summit consume over one ton of coal, and require over 1,000 gallons of water to send the 18-ton engines on their way.

Over the years, new technological advances have enhanced the operations and safety of the railway while maintaining the aesthetic and engineering integrity of the world-famous attraction. In addition to recently installed automatic hydraulic switches, upgrades to the operation include new braking systems, heated coaches and new baffling systems within the engines that allow the trains to run cleaner and more efficiently.

Year-round operations and winter ski trains are just the next chapter in the story of this National Historic Engineering Landmark. From the “can-do” attitude of Sylvester Marsh to the visionary goals of the current owners, Wayne Presby and Joel Bedor, The Mount Washington Cog Railway is embarking on a new era, utilizing modern technologies to preserve and enhance the historic legend.

Slated hours of operation are 9 a.m to 4 p.m. daily. Full-day access to skiing and riding is $59. A single-run ticket or round-trip excursion is priced at $25 per person. For $75, skiers and riders may ski all day at both Bretton Woods Mountain Resort and the Mount Washington Cog Railway, with complimentary shuttle service between the areas. Ski and Stay lodging packages at The Mount Washington Hotel and other resort lodging properties include a discount at the Cog Railway.