Upper glades in Phase One of Brackett Basin now open 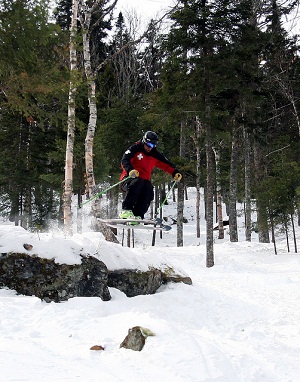 CARRABASSETT VALLEY, Maine – Thanks to 10 inches of new snow last weekend, Sugarloaf opened the Brackett Basin glades to skiers and riders on Saturday for the first time this season. Brackett Basin is part of a three phase glade expansion onto neighboring Burnt Mountain that makes Sugarloaf the largest ski area in the East.

The opened area represents Phase 1 of the Brackett Basin expansion, and features newly thinned areas and several new lines that glades crews cut during the summer months. Phase 2 of the expansion, which crews began work on this summer, remains closed for the time being due to ongoing logging operations.

The lower Brackett Basin glades (Rough Cut, Red Horse, Blacksmith, High Ball, and Logging Road), and the first glades inside of Phase 2 (Golden Road and the Eastern Territory) remained closed. Sugarloaf Ski Patrol estimates that these glades will require 5-10 additional inches of snow before they can be opened.

Brackett Basin is the first phase of a massive 655-acre terrain expansion onto Burnt Mountain, which was announced in the summer of 2010 as part of the “Sugarloaf 2020” ten-year road map. The expansion doubles Sugarloaf’s in-bounds terrain, making it the largest ski area in the east.

The Brackett Basin terrain is all gladed, “sidecountry” terrain, offering skiers and riders a one-of-a-kind backcountry style experience, with the security of patrolled, inbounds terrain. A glade refers to any wooded area where trees have been thinned, rather than cleared like a traditional trail. The expansion will be completed in three phases, the first of which was the 270-acre Brackett Basin, which first opened during the 2010-11 season. The second phase will encompass 135 acres, and the first portions of Phase 2 are expected to open later this season. The third and final phase will be 250 acres, and will open the north face of Burnt Mountain. When the expansion is complete, skiers will enjoy a vast, 655-acre glade and an experience unlike anything else in the East.