CARRABASSETT VALLEY, Maine — With leaves still on most of the trees, Sugarloaf received its first significant snowstorm of the 2009/10 season, with 6-7 inches of new snow piling up at the summit. Snow began falling during the overnight hours and continued throughout much of the day, with temperatures hovering in the mid to upper twenties throughout the day.

“It’s been snowing all day long and has actually started to get pretty deep up near the summit,” said Ethan Austin, Sugarloaf Communications Manager. “We typically get one or two early season storms like this. Several years ago we had an October storm that buried us in nearly four feet of snow, so these kinds of storms certainly aren’t unheard of.” 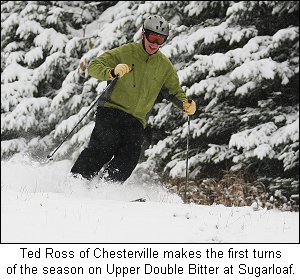 Weather forecasts are calling for continued cold temperatures this week, with a chance for more natural snow. If the temperature forecast holds true, Sugarloaf’s snowmaking crew plans to make snow later in the week to test the snowmaking system in preparation for the upcoming season. The mountain is scheduled to open for the 2009/10 season on November 20.