Trip Report:
I'd planned on taking the weekend off from skiing as my local hill, Greek Peak, was closed. The weather for Hunter was calling for temps in the 20's Saturday night, sunny mid 30's Sunday. I knew Scotty would be there after he got done working, so Hunter it was.

I could've got a ticket online Friday for $43, $47 Saturday, but I decided to burn one of my 3X days as I bought the Bohemia pass that comes with 3 Plattekill tickets. I day trip the Cats, so only one hill per weekend, figured might as well burn one now.

I pulled in right at opening and loaded the six-pack about 8:45. The conditions were good early. There were a few uneven spots, but overall pretty good. Same 3 trails as last week, Hellgate, Cliff, and Jimmy Huega. The improvement was F lift was spinning, so no need to go to the bottom. Skied off the F most of the day, ski on.

Hooked up with Jim G and his friend Carl about 9:30. Took an early lunch and met Scotty in the lodge. Back on the hill at noon. Things got scrapped off up top, but below were nice soft sugar snow bumps. We decided to call it quits at 3. I started off down the hill. I made it about halfway to where Jimmy splits off, suddenly, BAM, knocked off my skis by a young boarder. Double eject, one ski stuck shovel first in the snow. I asked if he was alright, followed by "Why did you run into me". He claimed I cut Infront of him, BS, I said, I was making predictable short turns when he slammed me. Luckily I landed on my good shoulder, or I'dve been pissed. Ironically the crowd had thinned considerably at the time of the collision. I made one run looking for Scotty, and decided I'd had enough.

Other than getting slammed, fun day on the hill. About 13 runs, legs felt good. I kept my eyes peeled for blue boy, and my ears strained for vuvuzelas, but no sightings. 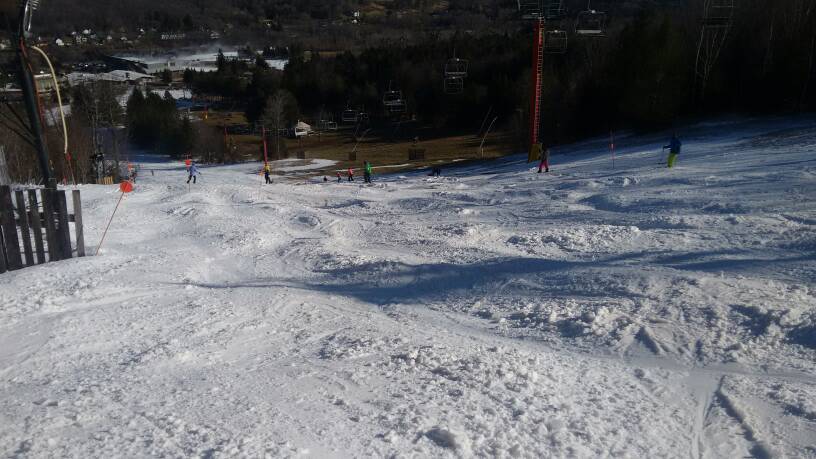 Jim G Infront of a man-made plastered tree up top.