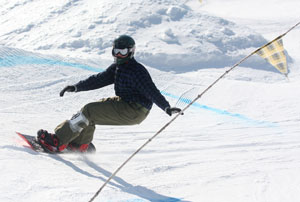 The two-day Banked Slalom is a snowboard-only, open registration event, in which snowboarders young and old compete on a winding course of banked turns down Sugarloaf’s storied terrain.

On the women’s side, Miriah Chapman from Dexter, Maine, and Chelsi Christensen from North Hampton, New Hampshire finished in second and third place, respectively.

“The course this year was incredible and this whole event is so much fun,” Flynn said. “It was so smooth, and even though it was faster than last year’s, it felt bigger. It’s great to see the event keep growing like this. I’m bringing more and more people with me each year.”

Based on the model of the Mt. Baker Legendary Banked Slalom, the Sugarloaf Banked Slalom is organized in part by two-time Olympic Gold Medalist Seth Wescott. Wescott did not race in this year’s event due to an injury sustained on the World Cup tour earlier in the season.