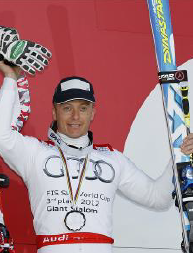 Massimiliano Blardone did not miss his comeback at Dynastar and Lange this season by ending third of the World cup in Giant Slalom.

After an exceptional winter, punctuate with four podiums in World Cup including two victories in Alta Badia and Crans-Montana, the Italian chose to sign two years more with Dynastar for skis and bindings and Lange for boots.

Massimiliano Blardone: “The decision to stay with Dynastar and Lange was matured during the season. We have created a very strong link with all the team. The professionalism and the mutual respect are fundamentals to realize the best results. The group believes in my sports capacities and develops for me the best equipment. It was a motivation important for me and I am going to be able to continue this collaboration serenely during the next two seasons.”

All the team is very satisfied with the pursuit of this collaboration and wishes “Max” Blardone all the best for the coming years.
Honors: