WEST DOVER, Vermont — Mount Snow offered its earliest lift service opening in history this Saturday when the Discovery Shuttle lift loaded its first passenger at 9:30a.m. The early opening also made Mount Snow the first and only resort open in Vermont. The Launch Pad trail was filled with a dozen terrain park features and over 700 skiers and riders in attendance throughout the weekend.

Lift tickets were sold for $10 or 10 non-perishable food items. All of the $5,000 and over 1,500 food items raised will be donated to the Deerfield Valley Food Pantry. This marks the second year in a row of Mount Snow donating its opening weekend revenue to charity. Last year they rose over $1,800 for the Guy Hawkins fund. 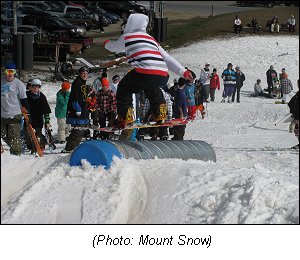 Skiers and riders from as far north as Burlington and south as New Jersey made the trip for early season snow at the Fan Gun Capital of North America. The conditions did not disappoint and further proved the worth of Peak Resorts $9 million investment in snowmaking at Mount Snow over the past three seasons. On Sunday, the larger crowd of the two days was treated with some light snowfall by Mother Nature to add to the excitement of early season skiing and riding.