Seventy five years ago this spring, the chairlift was invented as part of a major new ski resort in the Idaho backcountry planned by the Union Pacific Railroad and its board chairman W. Averell Harriman. The resort was named Sun Valley, and the new form of uphill transportation, which was almost passed over in the planning process, became the workhorse conveyance of ski resorts throughout the world. 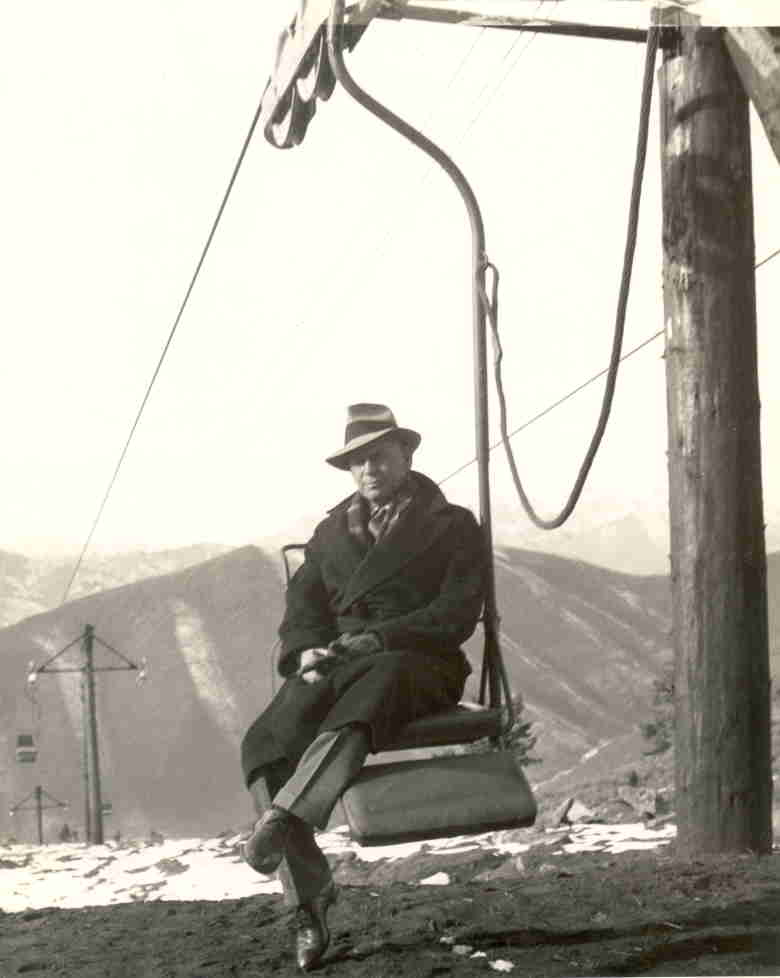 Larry McNeil of the Union Pacific Railroad tests the Proctor Mountain chairlift at Sun Valley, one of the first two in the world, in December, 1936. Library of Congress

The story of the chairlift’s invention, as well as other highlights of the history of the ski industry, is told in a new annual exhibit at the New England Ski Museum. From Pastime to Enterprise: Skiing Becomes a Business opens on Friday, June 3, 2011 at the Franconia Notch Museum, and will be in place until the end of the 2012 ski season.

In addition to the new annual exhibit, the Museum displays certain objects and images from the history of skiing in New England and beyond for longer periods. The parka of National Ski Patrol founder Minnie Dole, for example, a ceremonial sword presented to the commanding general of the World War II 10th Mountain Division ski troops, and the five Olympic gold medals won by Franconia native Bode Miller will remain on display.

The new exhibit details the beginnings of ski tows and lifts, which vastly boosted the popularity of the sport by relieving skiers of the need to climb uphill. The first ski tow on record was built at Schollach in the Black Forest of Germany, powered by a water wheel. The prototype of surface ski tows was the Bolgen lift at Davos Switzerland, built in 1934 by engineer Ernst Constamm of Zurich. Ordered by Averell Harriman to devise a new, more comfortable way for Sun Valley skiers to ride uphill, Union Pacific engineers combined the basic pattern of circulating wire rope that Constamm used in Davos, with the unique contribution that James Curran made to skiing. Curran, son of a Nebraska sheriff and a Union Pacific engineer, had come up with a hook-shaped hanger and cable for unloading heavy bunches of bananas for a previous employer. In the spring of 1936, Curran designed a small chair seat that would be suspended from an overhead cable, raising anxieties by his superiors that hoisting paying customers six or more feet off the ground would be hazardous. Luckily, ski consultant Charles N. Proctor saw Curran’s plans, allayed the concerns, and obtained Harriman’s approval.

The first two chairlifts in the world went into operation at Sun Valley in the winter of 1937, and the first in the east was built the next year at Belknap Recreation Area (now Gunstock) in Gilford, New Hampshire. Chairlifts evolved from singles to doubles, then to quads and six-seaters, and since the 1980s the standard configuration is the detachable quad chairlift. The exhibit takes note of an early detachable quad built in 1969 in Utica, New York that was a bit too far ahead of its time for reliable operation.

Another major advance for skiers came about 15 years later, when aviation engineer Howard Head unveiled his Head Standard, the first commercially successful ski made of metal. It took Head three years and 39 failed models of his ski before ski instructor Clif Taylor declared the 40th version of the ski a success following a run down Mount Washington’s Tuckerman Ravine Headwall in April, 1950. In the following ski season, 60 years ago now, Head made and sold the first 300 pairs of his skis. Head skis and other models made of metal would come to dominate the ski market in the 1950s and 1960s before fading in favor of fiber-reinforced plastic models.

The exhibit offers vignettes in photographs and text of other inventors whose creations have eased the life of skiers and riders over the years. The first systematic grooming was carried out by Mount Cranmore beginning about 1940. Emmitt Tucker, Sr., of Jump-off Joe Creek, Oregon, invented the Tucker Sno-Cat, which provided the motive power for ski area slope grooming for decades. Harold Hirsch learned to ski as a Dartmouth student, then re-organized his family’s textile company producing work clothing for loggers into White Stag Ski Togs, a leading maker of ski apparel Willy and Maria Bogner took advantage of a new kind of elastic fabric in the mid-1950s to stitch stretch pants in their Munich factory housed in a former sauerkraut plant. 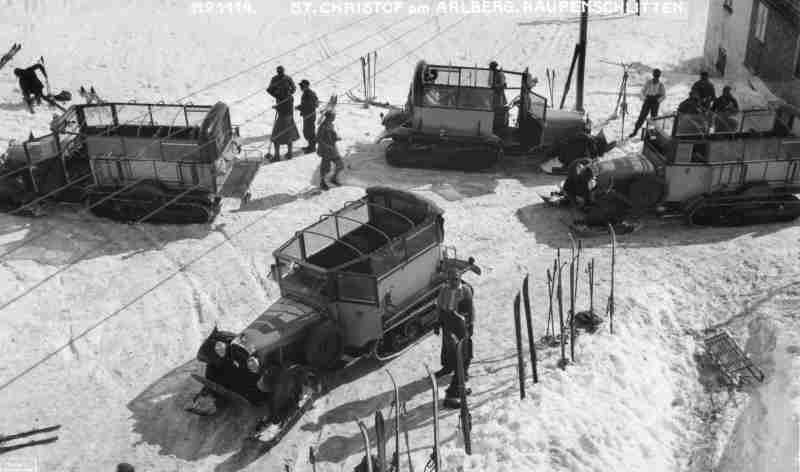 Early over-snow vehicles traveled from St. Anton, Austria to the Arlberg Pass in the 1930s. Tracked vehicles that could travel on snow were prerequisites to modern ski area grooming, which began about 1940.

An exhibit opening reception will be held at the Museum on June 3 from 5 to 7 PM. At the event, the Eastern Ski Writers Association will present the Don A. Metivier Golden Ski Award, on long-term display at the Museum, to the top male and female Eastern amateur ski racers of 2011.

Also at the exhibit opening, the Burckett-Dodge Award, presented annually by the Eastern Alpine Officials Committee of the United States Ski Association for outstanding contribution to alpine race officiating, will go on display after a period of obscurity.

The public is cordially invited to the June 3 reception; a $10 donation is requested, and appetizers and refreshments will be served. For more information please call 603-823-7177.

New England Ski Museum is located at Exit 34B, Interstate 93, next to the Cannon Mountain Aerial Tramway in Franconia Notch State Park .

The Museum also maintains satellite exhibits at the Eastern Slope Inn in downtown North Conway, NH, at the Intervale Scenic vista in Intervale, and at Bretton Woods Mountain Resort in Bretton Woods, NH.