LUDLOW, VT ??вЂќ The stage is set for action and adventure at Okemo Mountain Resort with numerous Terrain Parks, the massive SoBe Super Pipe and a Vert Wall that are all open to skiers and riders this season.

Okemo’s Parks and Pipes crew had a vision for the 04/05 season that began by revamping the existing boxes and rails to give everything a fresh new look. Next, they created new jibs (25 existing and 11 new.), added even more features and constructed a huge Vert Wall at the bottom of the Nor’Easter Super Park. Finally, they assembled a strong Park & Pipe Ranger crew with loads of experience. The result is lots of high-flying action and fun. 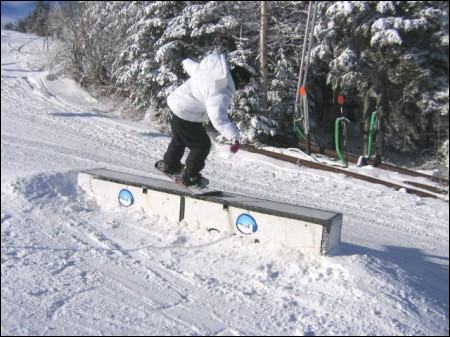 Kids’ Trail Map & Guide to Kids’ Glades:
Okemo has taken gladed skiing one step further exclusively for kids with the addition of a new Kids’ Trail Map & Guide to Kids’ Glades. Several areas within the Okemo boundary have natural features and glades and Okemo’s Cutting Edge Learning Center instructors have identified these areas. They worked with the natural features to create several gladed areas and have marked the entrances with a Snowmonsters sign. Kids can follow the map, look for the Snowmonsters sign and explore. There are no names attached to these glades, the Snowmonsters signs serve as their guide. Each gladed trail ends up off of Okemo’s trail network, so there is no fear of getting lost. (For example some of the kids’ gladed areas fall between Heaven’s Gate, Exhibition and Coleman Brook; Ledges and World Cup, or Upper Arrow, Lower Arrow and Sapphire). The Kids Gladed Map is available at the Cutting Edge Learning Center. There is a special reminder for adults on each map, “Remember, these glades were created to be skied and ridden by kids. Adults and their equipment may not fit.”