WINDHAM, NY ??вЂќ Darrell Morrison’s title at Windham Mountain is Head Snowmaker, but he refers to himself as “the world’s most dangerous, most talked-about compressor engineer.” In truth, it might be more correct to say “the world’s hardest working and most listened-to compressor engineer.” This is not only a guy who arrives at the ski area at 3:30 in the morning and leaves well after dark. This is a skilled laborer, your basic regular guy, who has become the voice of the resort.

“Darrell’s Snow Report” is heard ’round the globe on the World Wide Web. His signature salt-of-the-earth style, spiced by dry humor, has become a smile-inducing staple of Windham Mountain’s website. Now it’ll be heard throughout the New York metro area and into the Hudson Valley on a series of radio spots recently recorded in a New York City studio.

“It was my break into the big time,” the 54 year-old jokes, “my Broadway debut.” 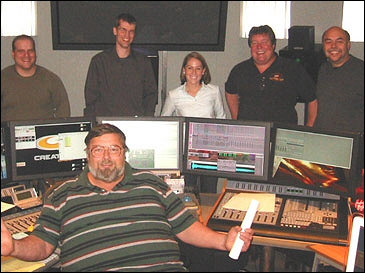 Darrell Morrison lives it up in a Broadway recording studio
(Photo: Courtesy of Windham Mountain)

Who is this gruff-voiced, friendly-bear of a guy who has gone from the relative anonymity of the snowmaking shed to near-stardom on the web and radio?

A big guy with a neatly trimmed salt-and-pepper beard, Darrell’s a native of Lima, Ohio, where he ran a machine shop and was an experienced machine operator. He came to Windham Mountain 20 years ago because a cousin was working here. “My cousin told me that they were looking for a compressor engineer. Al Emerton (longtime Windham Mountain operations manager) hired me over the phone.”

Why would an Ohioan suddenly move east? “The Catskill Mountains,” Darrell says simply. “They’re so pretty. I came in ’85, my cousin left in ’89, but I wouldn’t leave. You’ve gotta remember that it’s flat as a pancake where I come from. It’s so beautiful here. When the time comes, they can spread my ashes all over these mountains.”

As head snowmaker and compressor engineer, Darrell manages and monitors the entire snowmaking system. It’s a balancing act in which he must perfectly blend the flow of air and water. The trick, as he tells it, is to “work the system full out” while maximizing the water and minimizing the air. “The more air you use, the more expensive it is, and less air is less expensive,” he explains. “Because the energy you use for air in the compressors is more, and that causes a lot more wear and tear. As you add more water going to the guns, you get more air back, which means you can push more water and use less air. As you get more air back, you can add guns.” Outside air temperature figures into the formula, as well as humidity.

Confused? That’s okay. It takes a man with years of experience to get it all working properly. And, when it comes to snowmaking, Darrell’s seen it all. “When I first started, using the same amount of air, you could maybe run thirty-five guns. That was a lot of guns. Now we can run a hundred and seventy-five. I’ve seen it where you could run over two hundred. And now I’ve got a computer system that tells me exactly what’s happening all over the mountain.”

A maestro at conducting a compressor, hoses and snowgun orchestra, Darrell was reluctant to be the voice of the resort. “Al [Emerton] told me what he wanted me to do it,” Darrell recalls. “I said ‘no.’ He said ‘yes.’ I didn’t want to let him down.”

With help from Windham Mountain’s Guest & Lodging Services Director, Jefferson Kewley, Darrell took the plunge. “Jefferson coached me a lot. Without him, I wouldn’t have done it. Couldn’t have done it. He wrote out a speech the first time. Then we wrote the next one out together. After that, I wrote ’em myself and it became easy. I was scared at first,” Darrell confesses, a touch of awe remaining in his gravelly voice. “I’d never done anything like that before.”

Now Darrell writes all the scripts for the weekly website broadcast. He creates them, he relates, “in the very early morning while I’m watching the gauges. At 3:30 in the morning, there’s not a lot of people around to disturb me. Then at 4 p.m., I go over and we record them.”

Darrell’s style is distinctive, but it’s no hype. What you hear is what you get – snowmaking and ski area news delivered in a straightforward but upbeat manner, delivered with a bit of breathless enthusiasm and a touch of Ohio twang. Listeners hear a local guy who thoroughly enjoys himself, and who clearly wants the rest of the world to enjoy, too.

Putting Darrell on the radio seemed logical. “He’s a natural,” says marketing director Kirt Zimmer. Still, this meant the Ohio/New York country boy going to the Big City and world media capital. “I’d gone through there a few times on my way to the airport,” Darrell reports, “and I swore I’d never go there. But, it fascinated me. I could watch the people forever.”

Was working in the Big Apple nerve-wracking? “Darrell was nervous for about half a second and a half,” says Jefferson. “He did great. He really impressed the recording engineers.”

Darrell’s not losing his perspective, however. “I enjoy myself,” he says. “But, if it wasn’t for Jefferson coaching me, I never would’ve done it. When I hit the big time, I’m taking Jefferson with me.”

Triumphantly back from his big city debut, Darrell has returned to long days making snow and his weekly web report diversion. And, although he may understate his newfound celebrity and the his vital role on the Windham team, rest assured he’s well appreciated by his co-workers. “You wouldn’t believe the amount of hours this guy puts in,” Jefferson says. “We couldn’t run the place without him.”