WINDHAM, New York ??вЂќ Something radical’s in the air. Nope, it’s not the rad dudes and shred Betties flying through the Windham Mountain terrain park and halfpipe.

Switch is a hip, new magazine that covers the entire, very active freestyle scene at Windham. Actually, it’s more than a magazine. Switch is a community. It’s a fellowship made up of everyone who loves to hit the park, the pipe or just ride free and hit a few jumps along the way, or execute a quick tail grab just for the heck of it. The Switch crew can read the latest news, photos and stories from Windham and can receive e-mail shout outs from Grimie.

Who’s Grimie? He calls himself the Switch “go-to guy.” He’s one different cat, that’s for sure, and it’s his job to catch all the communiques from Switch readers, and to get them posted on the site. (He also claims to scrub toilets and do other grime-ridden jobs around the resort, although nobody can say they’ve actually witnessed him doing any of that dirty work…) 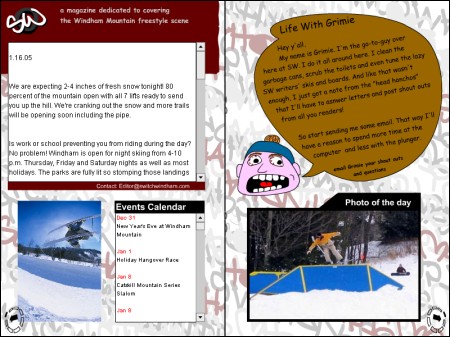 Switch features snow alerts, trail updates and, of course, the latest park and pipe conditions. Event listings are also found at Switch. Results are posted from all the latest events, like USASA slaloms and boardercross, the Freeride Series halfpipe competitions, and other on-mountain happenings. Results postings aren’t composed simply of a winners list. Switch visitors find a full description of the elements and conditions, plus detailed accounts of the action.

New content will be posted throughout the season, including features like charged-up video clips and interviews with the people who make it all happen at the resort. Site offerings are rounded out with fine downloads of buddy icons and wallpaper, and a fully interactive trail map.

Windham has been at the freestyle cutting edge for several seasons now, and remains among New York’s elite resorts for park and pipe riding. Switch ratchets up that freestyle scene yet another notch.

So what’s with the name?

“As freestyle skiers and riders know, ‘switch’ is a term for going backwards,” says Marketing Director Kirt Zimmer, who conceived the site along with Windham native Rob Ticho. “The degree of difficulty in switch tricks is higher, and we liked the connotation of doing things differently. It’s an alternative culture, a ‘switch’ from the norm.”

It also worked out that the ‘SW’ acronym for SwitchWindham is the same as Ski Windham, the former name of Windham Mountain. So with a nod to the past, Switch moves boldly on to the future.