Not to be outdone, Drift Innovation in November added their newest flagship Drift HD Ghost to their camera lineup, sitting on top of their Drift HD and Drift HD 720 models.

There is no doubt the Drift HD Ghost is launched to compete with the new models of GoPro that are on the market, which are raising the bar on features and compatibility.

What’s in the Box

The HD Ghost camera is a full-featured action cam, and you can tell from the moment you open the package. The packaging has it’s own premium look and feel to it, not unlike the GoPro packaging. It’s an attempt to impress right out of the gate, and it works.

There is no denying the premium feel this camera has. First impressions are definitely of a very high build quality. The design is very sleek, and simply looks much nicer than a GoPro, which has a pretty boring rectangular design. This camera doesn’t need a case, unlike a GoPro; it is by itself waterproof to 3 meters (9 feet) – assuming you are using the battery backplate that doesn’t have the USB and Audio cable ports.

Any deeper than that (attention: Scuba Divers!) and you will need to pick up an additional external waterproof housing, which wasn’t available at the time of this review.

The feature list on this camera stacks right up there with many of the top of the line cameras:

Drift has announced they will be releasing an iPhone and Android app that will utilize the wi-fi functionality of the camera, but it wasn’t available yet for us to test. If we do get it soon, we will update this review with the functions of the app.

Speaking of the remote control, it is very simple and understated. Two buttons and some lights on the side that give you a quick visual indicator of what is going on. Blinking lights indicate what mode is currently selected;

When the light is blinking red, it is recording video. That’s it – really nice and easy and this instantly eliminates that annoying question, “Is it on?”

Other unique features of this camera include a “video tagging” mode, in which the camera is continuously recording, but doesn’t actually commit the recording to memory until you press a button on the remote or the camera itself. This helps eliminate boring footage that might have to be cut out later; or worse, prevent people from uploading 20 minute videos of themselves buckling a ski boot.

The outside is rubberized and feels very nice and grippy. Water or moisture shouldn’t be an issue. The camera comes with two battery covers; one with ports for an audio cable and a USB cable, and one that is solid. If you want to shoot in wet conditions, you are probably better off using the solid back cover.

Behind the cover, you have a small latch to access the battery compartment. You also have several connection options, including HDMI (right to your TV!), standard USB cable, an Audio connector.

The bottom of the camera also has what looks to be the standard mic, and a screw-in plate for the universal mounting adapter.

It makes sense to run a comparison against the de facto standard in action cameras, the venerable GoPro, to see where the differences are.

The camera is definitely not small.  It’s larger than a GoPro; yet sleeker. The HD Ghost has the same gunbarrel design as the Sony and Contour action cameras, which lend themselves well to being side mounted on a helmet; as opposed to on top, in typical GoPro “tele tubby” style. With the case; the GoPro is closer in size to the HD Ghost.

One of the biggest differences between the Hero and the HD Ghost is the inclusion of the 2″ LCD screen on the camera. This is incredibly useful when it comes to preventing mis-aligned shots. The GoPro does have accessories (LCD Bacpac and the wi-fi app do allow for viewing from a smartphone or tablet) that allow you to view the shot, but nothing baked in. This makes it easy and, most importantly, able to operate standalone.

While the HD Ghost looks like it may have a larger lens; it is in fact just covered up by a glass plate behind the four screws you see here.

So, besides the 2″ screen, how else does this stack up on paper against the GoPro (specifically, the newest Hero 3 Black Edition)?

Besides these items, the cameras are pretty similar in terms of specs.

Keep in mind that the GoPro, with the case on it (necessary for almost every activity), ends up being much closer in size to the HD Ghost as well.

When we get some footage from the camera on the slopes, we will share it, so stay tuned!

Quality / Feel: 5 / 5 – The rubberized outside is easy to hold on to, attractive design, rubberized buttons are larger and easy to press.
Ease of use: 5/ 5 –  Easier to use than many of the competitors on the market. The built in screen makes playback and adjusting settings easy and intuitive.
Features: 4  / 5 – WiFi is nice, but there is no app to test it yet. The lack of 60FPS at 1080p resolution is also a downer. Other than that, this camera hits all the marks for a great action camera.
Ergonomics: 4 / 5 – Larger than a GoPro, but the barrel design allows for more streamlined mounting. A slightly more compact and lighter design would have bumped up this score.
Video / Image Quality – TBD – After we run some on-slope tests; we will update this score. 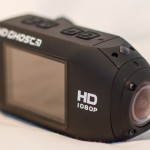 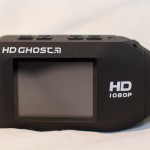 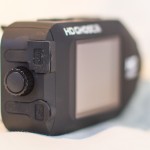 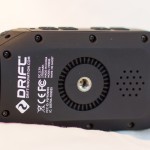 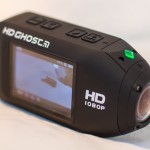 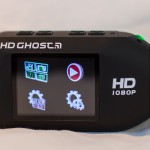 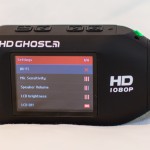 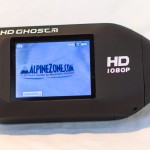 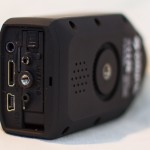 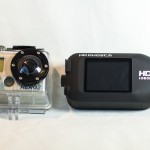 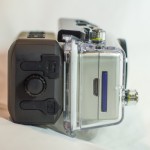 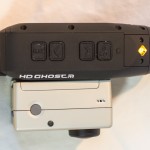 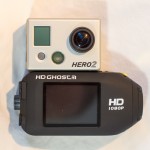 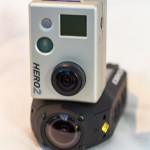